Bosnia on the road to the EU, sorry to Dissolution

”Young people, they are starting to think that ethnic divisions are normal … if something doesn’t happen to change this, there will be no change.” (Emin Mahmutovic, civic activist)

Despite international community’s state building efforts in Bosnia the country is splitting parts Since war 15 years ago foreign aid has exceed USD 80 bn for artificial creature designed in Dayton agreement aiming multi-ethnic state with EU perspective. As a result Bosnia is now even more divided, with less national identity, 20 percent of population living under the poverty line, with a nightmare triple administration plus international supervising making the country as worst place in Europe to do business west of Ukraine, even as it seeks to join the European Union. (Bosnia this year ranked 116th in World Bank’s ease of doing business index.)

Bosnian war (1992-95) included massive transfer of populations so it was possible to draw new boundaries according ethnic groups. Armed conflict between Yugoslav, Croatian and Bosnian forces and militias, accompanied by massive human rights abuses and violations, led to the displacement of over a million people and the creation of ethnically homogeneous areas within the newly independent – or better say international protectorate – Bosnia and Herzegovina (later Bosnia or BiH).

Dayton Agreement was made 1995 after bloody war had almost finished ethnic cleansing/transfer of populations so that it was possible to draw administrative boundaries according ethnic groups. The agreement split Bosnia into two semi-independent entities – the Serb dominated Republika Srpska (RS) and Bosniak-Croat populated The Federation of Bosnia and Herzegovina (FBiH) federation. The Croat-Bosniak federation is further divided into 10 cantons, each with its own parliament and government responsibility for local issues.

In general elections on 3 October 2010 will be elected Bosnia and Herzegovina’s three presidents—a Bosnian, a Serb and a Croat—and its two houses of parliament. The Federation (FBiH) alone has three levels of government (federal, cantonal and municipal) each of which has executive, legislative and judicial authority; 13 prime ministers and 14 legislatures. The result is a dense bureaucracy, whose various parts function in competition or open conflict with one another, and a suffocating thicket of confusing and often contradictory legislation and regulation.

The three points of the triangle represent the nation’s three ethnic groups: Bosniaks, Croats, and Serbs. The triangle itself represents the geographic shape of the nation itself. The colors represent neutrality and peace, whereas the stars represent Europe.

Each part (RS and FBiH) has its own parliament, government and president but the two are linked by weak central institutions. The Serb Republic and the Muslim-Croat Federation and three ethnic groups – Croats, Serbs and Bosniaks – are trying to lead state together and separately. And one could also add, that international supervision is still effective through “Office of High Representative” (OHR).

While earlier dispute was between Serbs and Bosniaks, last years have showed serious dissension between Bosniaks and Croats and ethnic divisions are deepening at time when Bosnia-Herzegovina is on the stage of transition from an international protectorate to one responsible for its own reform dynamics. Instead of developing its “European perspective”, Bosnia-Herzegovina going backwards remaining an unwelcome, dysfunctional and divided country, with an aggrieved Bosniak (Muslim) plurality, a frustrated, increasingly defensive Serb entity, and an anxious, existentially threatened Croat population.

Before Bosnian war the region was quite secular and multi-ethnic, mixed towns and even marriages were common. Now people live in segregated Muslim, Croat and Serb communities, even in same town the pupils are going to schools of their own ethnic origin. Education, which should foster a multicultural society, has instead been manipulated by each ethnic group. There are separate education ministries, and each draws up its own ethnically based curricula and textbooks. Now it’s common to see young Muslim girls with scarf which earlier was common only by older Muslim women.

While most Bosnian Croats already have Croatian passports and since Republika Srpska residents can apply for and obtain Serbian passports with access e.g to Schengen area, the Bosniaks with passport of Bosnia-Herzegovina can travel visa free only to half of countries compared to their country men with foreign passports.

One aspect making Bosnia unstable is religion. The question is not only divisions between Catholics, Orthodox and Islam views, but at the center of the issue is the Wahhabi sect, an austere brand of Islam most prevalent in Saudi Arabia and practiced by bin Laden and the Taliban. Wahhabis have been establishing a permanent presence in Macedonia, Bosnia, Kosovo, Serbia, Croatia and even in Bulgaria. The presence of radical Muslims in Bosnia is linked to the advent of mujahedeen foreign fighters who joined Bosnian Muslims in their battle against the Serbs in Bosnia’s 1992-95 independence war. After Dayton Saudi-backed charities were funding the movement as well investments. 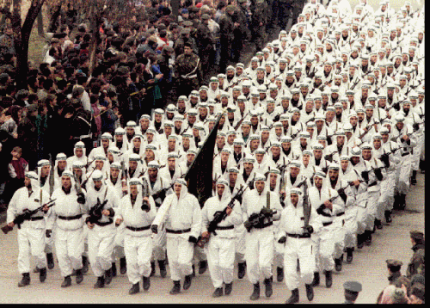 Al Qaeda organized El Mujahedeen Unit in Bosnia in 1995 consisted of 1,700 troops and was part of the Bosnian Muslim Army.

In Bosnia, the issue of Wahhabi influence is one of the most politically charged debates, with Bosnian Serbs maintaining there is a huge presence of Wahhabis in the country and Muslim Bosniaks downplaying the issue and at times claiming it does not exist. Bosnia’s official Islamic Community has been successful in curbing Wahhabi influence saying that even Wahhabi influence reached its peak in 2000 it has since started falling e.g. with measures taken by Bosnian authorities after 9/11.

On the road to Dissolution

During last 15 years international community has squandered more than USD 80 bn to build a multi-ethnic state with some European standards, a country which would have clear perspective to become EU member-state. War-damaged buildings have been replaced with new glass and steel high-rises. However, as I described earlier, divisions and even tensions are increasing between ethnic groups, the war memories are still fresh, the common understanding about history is missing as well any national identity. In Sunday’s elections, the voters will include 18-year-olds who have no memory of the war, but many of them live in segregated Muslim, Croat and Serb communities, they have maybe never met anyone from the other two ethnic communities. A dysfunctional administrative system especially in FBiH has paralysed decision-making, put the entity on the verge of bankruptcy and triggered social unrest.

Rival nationalist parties of the country’s three ethnic groups have a firm grip on power without any real perspective of national consensus. The international community has long insisted that more powers be transferred to central institutions in order to make the country more functional, but Bosnian Serbs strongly reject such moves and insist on retaining their autonomy and even gaining independence with same standards which western powers used in Kosovo case. Bosnian Serb leader Milorad Dodik took the discussion a step forward recently, saying that Bosnia was surviving only due to international intervention and that the time had come to discuss its peaceful dissolution. Also leaders of FBiH’s Croatian parties have over the past few months renewed calls for a separate Croat entity in BiH.

“I know that we are in a difficult campaign for elections. But after the elections, Bosnia’s political leaders, the new government ….will have to make important choices to prepare themselves, to reconcile with European standards and requirements,” (Spanish FM Miguel Angel Moratinos)

Related to European standards Bosnia is applying already some practices from newest EU member-state Bulgaria. Or what can one think about following quote from Sofia News Agency Novinite:

An “innovative” vote-buying practice crafted ahead of Bosnia and Herzegovina’s general elections on October 3 has been described as “Bulgarian train” by the press in Sarajevo. The vote-buying scheme called “Bulgarian train” includes a party activist who hands out filled ballot papers to votes before the polling stations. The voter is supposed to cast the filled ballot, and to bring out an empty ballot from inside the polling station; upon handing the empty ballot to the activist of the political party, the voter receives the promised payment for selling their vote. Then, the political activist fills the empty ballot paper, and hands it to the next willing voter, and the “Bulgarian train” keep rolling throughout the entire election day.

It is unclear exactly why this vote-buying technique described in the Bosnian press has been named “Bulgarian train” but the general association of vote-buying with Bulgaria is easy to explain as Bulgaria’s 2009 EU and national elections were plagued with vote-buying allegations, though only a couple of sentences.

According European Commission’s last country report (e.g. in my Document library ) Bosnia and Herzegovina urgently needs to speed up key reforms. The country’s European future requires a shared vision on the overall direction of the country by its leadership, the political will to meet European integration requirements and to meet the conditions which have been set for the closure of the OHR.

Both in Bosnia-Herzegovina and Kosovo many local stakeholders see implemented rules illegitimate and foreign-imposed – and they are right. Internationally imposed solutions are not sustainable, to get real progress the inter-ethnic agreements must be made at local level.

In my earlier article Bosnia collapsing? I concluded following:

Can any country survive without some minimal mutual self-identification across its citizens as a whole? If the shared non-ethnic Bosnian identity is taking steps backwards does this not mean that this artificial western desk-drawer plan is doomed to fail? I am afraid so but maybe it is loss only for those top level designers not for local population.

International Crisis Group estimates that continued worsening of relations among Bosniak, Croat and Serb leaders, compounded by a fiscal meltdown after the 2010 elections, could transform public dissatisfaction into ethnic tensions and violence. I am not so pessimistic the possible outcome could be peaceful dissolution. This should be facilitated also by international community if it is ready to accept de facto situation on the ground more than sticking to old dysfunctional agreements.

Some of my earlier articles:

This entry was posted on Saturday, October 2nd, 2010 at 11:37 pm and is filed under BalkanBlog, Balkans, crisis management. You can follow any responses to this entry through the RSS 2.0 feed. Both comments and pings are currently closed.

7 Responses to Bosnia on the road to the EU, sorry to Dissolution