The Third Intifada – To Fade or Escalate

An upraising sweeping through the Middle East has acquired a new dimension with the eruption of the Palestinian masses along Israel’s borders last weekend. Palestinian groups on Facebook have been calling months for violent uprisings against the citizens of Israel, openly planning a Third Intifada on May 15th, 2011. Thousands of Palestinians and their supporters were embroiled in deadly confrontations with the Israeli army as protests erupting across the Palestinian territories, Israel and its borders with Syria, Lebanon and Jordan were met with live fire, rubber bullets, stun grenades and teargas.

Previous intifadas resulted in the deaths of thousands of innocent civilians through suicide bombings and other horrific acts of terror. Every 15 May, Palestinians commemorate the Nakba (catastrophe) of the declaration of independence of the state of Israel on 15 May 1948. This is the first year that Palestinian refugees in Syria and Lebanon tried to breach the Israeli military border in marches inspired by recent popular protests around the Arab world. 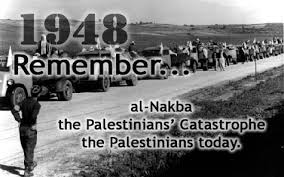 “Nakba Day”– the Day of Disaster- is commemorated on the 15th of May, the day of Israel’s founding. Today’s demonstrators and rioters were protesting not against the events of 1967, but against Israel’s very existence.The leaders of these violent demonstrations have personally stated that their struggle is not over the ’67 lines, but rather to undermine the very existence of the State of Israel, which they define as a disaster which must be corrected.

The First Intifada (1987–1993) (also “intufada”) was a Palestinian uprising against Israel in the Palestinian Territories. The background of uprising included also socio-economic aspects; e.g. the high birth rates in the Palestinian territories combined with limited allocation of land for new houses and agriculture were increasing population density and a rising of unemployment. At the time of the Intifada, only one in eight college-educated Palestinians could find degree-related work. The uprising began in the Jabalia refugee camp and quickly spread throughout Gaza, the West Bank and East Jerusalem.

The main components of 1st intifada were civil disobedience and resistance movement, acts such as general strikes, boycotts on Israeli products, refusal to pay taxes, graffiti, and barricades, but also stone-throwing by youths against the Israel Defense Forces (IDF).

In 1st Intifada the PLO had limited control of the situation and it never expected the uprising to make any direct gains against the Israeli state, it was a grassroots, mass movement. The Second Intifada, also known as the Al-Aqsa Intifada (2000–2005) had different approach. Imposing factors included the Lebanese example, the breakdown of the Camp David negotiations on July 25, 2000 and appreciation in the international community of Palestinian responsibility with this. Palestinian violence might be planned by the PA leadership, and aimed at provoking and incurring Palestinian casualties as a means of regaining the diplomatic initiative. Immediate reason – or excuse – for upraising was On September 28, the Israeli opposition leader Ariel Sharon’s visit to the Temple Mount (where al Aqsa is located) on September 28, 2000 which the Palestinians saw as a provocation and an incursion. 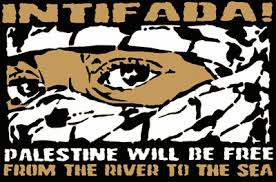 Palestinian acts were mass protests and general strikes, similar to the First Intifada, but this time there was much more armed attacks on Israeli soldiers, security forces, police, settlers, and civilians, suicide bombing attacks, and launching Qassam rockets into Israel. Israel’s unilateral disengagement from the Gaza Strip, announced in June 2004 completed in August 2005, is seen as the end of the 2nd Intifada.

The death toll, including both military and civilian, is estimated to be 6500 Palestinians and over 1100 Israelis, as well as 64 foreigners. Some 70 % of killed Israelis were civilians, and about 10 % of killed Palestinians were implemented by Palestinians.

In general the 3rd Intifada has not gained open or wide support among Palestinian nor other Authorities. In Gaza the Hamas police stopped buses carrying protesters near the main crossing into Israel, but dozens of demonstrators walked on foot and reached a point closer to the Israeli border than they had reached in years. Hezbollah, which controls Lebanon’s southern villages had given tacit support for the protest but the crowd was dispersed by Lebanese troops firing into the air as the Lebanese Army tried to prevent provocation in cooperation with IDF. In Egypt, thousands rallied in Cairo in a Facebook-organized campaign aimed at marching all the way to Gaza. Thousands of Egyptians had planned to march to the Egypt-Gaza border to stand in solidarity with Palestinians, but Egyptian security forces prevented buses from carrying them. Egyptian riot police fired tear gas and live ammunition to disperse thousands of pro-Palestinian protesters outside the Israeli Embassy.

Syria however is exception. Hundreds of Syrian rioters infiltrated the Israeli-Syrian border into the village Majdal Shams, and in the center of the village violently rioted against IDF forces. In attempt to turn the rioters back to Syria, forces fired selectively towards rioters who were targeting security infrastructure and some were injured as a result. It seemed likely that President Bashar al-Assad Syria was seeking to divert attention from his troubles caused by popular uprisings there in recent weeks by allowing confrontations on the Golan Heights for the first time in decades. (Updated information – from Israeli side – available e.g. from IDF and Tweets of IDF Spokesperson )

The neglected side of “Nakba”

The other side story is that of some 900,000 Jews, uprooted since 1948 from thousands of Jewish communities that had existed in the region for 2,500 years. While those Arabs who fled or left mandatory Palestine and Israel numbered roughly 750,000, there were more than 900,000 Jewish refugees subsequently expelled or forced out from Arab lands at around the same time. Before the state of Israel was re-established in 1948, there were almost 1 million Jews in Arab lands; today there are around 5,000.  While many of the Palestinian refugees were newcomers and fresh economic migrants, the Jewish refugees by contrast were being pushed out of the lands that they had lived in for thousands of years. Little is heard about these Jewish refugees from Arab countries because they did not remain refugees long. Some two-thirds went to Israel while the rest found safe haven in Europe, North America and elsewhere.

One aspect with “right of return” should also be highlighted: A recent ruling by the European court of human rights declared that due to the time that had elapsed, Greek refugees expelled from northern Cyprus in 1974 would not be allowed to return to their homes. Anyway my point is that besides “Nabka” the issue of the Jewish refugees should be remembered and recognized.

“The IDF, like any other army in the world, has the right and duty to protect its citizens” (Christopher Gunness, the spokesperson for the UNWRA)

Now after first days of 3rd Intifada it seem that the whole upraising fade before it even really started.To be more than hooliganism the demonstration should attract at least hundred times more participants. In my opinion crucial is if the new Palestinian Authority and Hizbollah are deciding to use upraising as a mean to achieve their political aims and allow using old violent methods (suiside bombings, Qassams …) as well their most modern weaponery e.g. such as Fatah-110 surface missiles, its Syrian equivalent the M-600, the mobile SA-8 (Gecko) anti-air battery with 18 warheads and Kornet second generation anti-tank missile (recently fired at a israeli children’s school bus from the Gaza Strip).

The Israel-Palestine conflict is at crucial stage. In my opinion there is now a few months negotiations slot before UN decides its position towards Palestinian state; when or if UN decision is made it might be harder to achieve a negotiated solution.

View of international community is not important only due political reasons, economical ones are significant too. The Palestinian Authority receives $100 million annually in military aid from the United States, and $2 billion in global financial aid, including “$526 million from Arab League, $651m. from the European Union, $300m. from the US and about $238m from the World Bank.” According to the United Nations, the Palestinian territories are among the leading humanitarian aid recipients.

If two state solution still is relevant aim so in my opinion good starting point could be the latest Olmert’s proposal on 2008 which may be most far reaching compromise so far (More this and other recent peace proposals in PaliLeaks, land swaps and desperate search of peace ). Saying this I still consider sc Three State-Option the most pragmatic solution for israeli-Palestinian conflict.

This entry was posted on Monday, May 16th, 2011 at 10:44 pm and is filed under crisis management, Middle-East. You can follow any responses to this entry through the RSS 2.0 feed. Both comments and pings are currently closed.

5 Responses to The Third Intifada – To Fade or Escalate