From historical perspective the Mladic’n arrest and the Hague trial serves as formation of a more comprehensive picture of events in the Balkans in the 90’s after the procecutor and the defense have made their case. Issues related to the underlying policy objectives of Srebrenica, events before Srebrenica and the number and the PR game around Srebrenica. Realization of the right however is only theatrical minor point for the EU and for the current Serbian government as both see it only as a formal step towards Serbia’s EU membership.

Serbia’s current government is hoping that Mladic’s arrest will clear the way towards EU membership. In the press conference of Mladic’s arrest President Tadic said “I believe that the doors for Serbia to joining the EU are open”. I disagree, there is lot of issues waiting on the table, minor problems such as accepting Kosovo licence plates and finally (after few years of negotiations) recognition of Kosovo’s independence too. E.g. EU Parliament Rapporteur for Kosovo Ulrike Lunacek said it clearly that extradition of Ratko Mladic to The Hague is insufficient for Serbia to join EU and that Serbia must do a whole lot more if it wants to join EU. “Serbia must show that it is ready to expand relations with an independent Kosovo,” Lunacek said. (Source: Dnevnik ) The technical association chapters need some work and remains to see what kind of EU there is existing when membership is on the door. It also remains to see how long negotiations with EU will continue as after elections the new government can whistle the game over.

Since Serbia’s EU application has its position improved, particularly related with energy issues. When the EU favored Nabucco is practically already dead project e.g. after events on the Arab Street (pipe has political support, but no gas available) and when the Italians and now also the French and German companies are backing Russia’s South Stream are Serbia’s changes to become an energyhub growing. Russia but also Turkey have been activated to wide their economic cooperation with Serbia and for example, last autumn came into force a free trade agreement with Turkey.

My opinion of the membership negotiations has remained relatively the same as follows:

In my previous articles, still and now even more than before I have a view that Serbia should think if joining to EU is worth of time, money and bureaucracy it demands, could the main benefits of EU membership be achieved via “third way”. Despite this I think that at this moment it is good idea to continue EU process but not only to fulfill EU needs but especially the needs of the beneficiaries aka Serbs not EU elite in Brussels.

More about Serbia’s EU perspective in my earlier article: Serbia’s EU association is not a Must

In my opinion more that fast track to EU the Mladic’s trial in Hague will be a fast track to discover what really happened in Srebrenica 1995 and before that. Todays picture about Srebrenica is still heavily manipulated. To me its clear that thousands of Muslims were killed in Srebrenica once this place fell to Bosnian Serbian forces as well that some of them were innocent civilians. It is clear too that thousand(s) Serbs were butchered around Srebrenica during Bosnian War 1992-95 e.g. by the 3rd Corps 7th Muslim Mountain Brigade lead by Bosnian Muslim leader of Srebrenica forces Naser Oric. To the Brigade mentioned were subordinated foreign Muslim fighters, also known as mujahedeen, who came from Islamic countries and it operated from “demilitarized safe area of Srebrenica”. One possible scenario is that when the Bosnian Serb Army responded to this terror and attrocies the remaining fighters attempted to escape towards Tuzla, 38 miles to the north. Many were killed while fighting their way through; and many others were taken prisoner and executed by the Serb troops.

One explanation to the cruelty in Srebrenica can be found from the testimony of French General Philippe Morillon, the UNPROFOR commander who first called international attention to the Srebrenica enclave, at The Hague Tribunal on February 12, 2004. He testified that the Muslim commander in Srebrenica, Naser Oric, “engaged in attacks during Orthodox (Christian) holidays and destroyed villages, massacring all the inhabitants. This created a degree of hatred that was quite extraordinary in the region.”

More in my earlier article Srebrenica again – Hoax or Massacre? .

The western mainstream media has demonized Serbs and their action in Bosnia and later also in Kosovo. The attrocies implemented by others have widely ignored. At the start of the 1992-95 Bosnia war, Muslims and Croats were allies against the Bosnian Serb forces, but they fought each other briefly when Croat forces tried to create a separate Croat statelet in northeastern Bosnia. Only a couple days ago it was reported thatBosnia’s warcrimes court has jailed a Croat ex-soldier for 15 years for the killing of more than 60 Muslim civilians during a brief 1993-94 war between Bosnian Muslims and Croats. Miroslav Anic received a reduced sentence under a plea bargain after pleading guilty to all charges. He was convicted of taking part in a series of attacks by a Croat militia on Bosnian Muslim villages from June to October 1993, it said. Anic had served as a member of the special unit Maturice, operating within the Croat Defence Council (HVO) under the command of Ivica Rajic who was sentenced in 2006 to 12 years in prison by the Hague-based United Nations war crimes tribunal. (Source: Trust.org/Reuters)

Mladic arrest and theatre in Hague will bring Srebrenica again front of a stage and this will have its effect in already fragmented and fragile Bosnia-Herzegovina. Probably confrontation between three ethic groups will increase and this could lead to the final dissolution of BiH. Serbia is keen to secure EU candidate status and Mladic’s arrest may be one step forwards for this aim while same time the trial of Mladic may be one step backwards in Bosnia-Herzegovina for its EU membership aspiration.

And congratulations, Serbia. Now you can join the European Union. Wonderful! Stand back and watch your industry destroyed as what you export is assimilated by German industries, watch your agriculture decimated as you are paid not to produce and your production goes to France before you are left with barren fields, stand back and watch the EU label Slivovica illegal because some idiot in Brussels doesn’t like it. Stand back and watch your unemployment rate skyrocket, watch a clique of elitists whisked off to cushy jobs in Brussels, watch your prices treble and your salaries stagnate and watch your customs destroyed as you become assimilated first by the EU and then by NATO. You will have to pay for it, you know. The people, not the leaders, of course… Nobody will ask you if you want to join NATO but you will be expected to buy its equipment and participate in its wars. 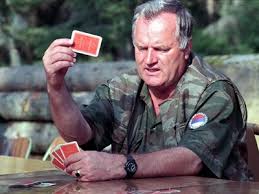 This entry was posted on Thursday, June 2nd, 2011 at 10:14 pm and is filed under BalkanBlog, Balkans. You can follow any responses to this entry through the RSS 2.0 feed. Both comments and pings are currently closed.

5 Responses to Mladic in Hague, Serbia towards EU, reopening Srebrenica