After recent failure to reach agreement on treaty for international arms trade the UN Secretary-General Ban Ki-moon wrote article ”The world is over-armed and peace is under-funded” (August 28, 2012). The main idea is in his article headline and article contents lot of good intentions and initiatives for peace development too. However I would like to bring up only one hard fact mentioned there. And here it is:

The fact above describes that Military-Industrial-Complex (MIC) – especially in U.S. – still rules the world. Global military industrial consumption represents a few percent of GDP and is still rising. U.S. share of the cake is about 40%. The international community still is willing to invest hundreds of times more to the war than peace. MIC is a concept commonly used to refer to policy relationships between governments, national armed forces, and industrial support they obtain from the commercial sector in political approval for research, development, production, use, and support for military training, weapons, equipment, and facilities within the national defense and security policy.

Even academia is in tow, with about 350 colleges and universities agreeing to do Pentagon-funded research. In Academic world neuro-weapons and diverse applications of numerous branches of research – such as the software guidance systems, general communications networking systems and robotics technology – that blur the distinctions between government, military, and medical, technological and scientific research.

MIC is not only weapons, their development and use, energy companies are one key sector nowadays. The wider picture is that U.S. tries to implement its Silk Road Strategy (SRS) by securing control over extensive oil and gas reserves, as well as “protecting” pipeline routes and trade on Eurasian corridor. This militarization is largely directed against China, Russia and Iran. More about SRS in my article “Is GUUAM dead?” 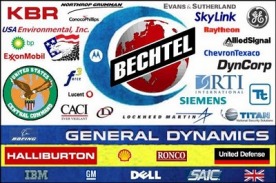 Amid all this waste the Pentagon spares no effort to keep the media on its side, both in the US and elsewhere. The military allocated at least $4.7 billion this year to “influence operations” and has more than 27,000 employees devoted to such activities.

War activities are producing high quarterly bonuses for owners of military-industrial-complex. Peace work has an opposite problem – it is not profitable, While global military spending is at least $ 1.7 trillion, the OECD Development tries to manage with some 100 billion, Peace work overall gets some 6 billion and 0.6 billion goes to conflict prevention. Peace Research, could help prevent conflicts, but development of tools for killing is much more lucrative. Against one peace researcher, is estimated to be more than 1100 researcher for weapon (and their use) developers.

The difference in what countries are prepared to invest in weapons and their use is huge compared to what they use for example, poverty elimination and economic development in developing countries. And just poverty is one of the causes of violence.

Some – Believe or not – Trivia

Every gun that is made, every warship launched, every rocket fired signifies, in the final sense, a theft from those who hunger and are not fed, those who are cold and are not clothed…. We pay for a single destroyer with new homes that could have housed more than 8,000 people…. This is not a way of life at all, in any true sense.

This entry was posted on Wednesday, August 29th, 2012 at 11:11 pm and is filed under crisis management. You can follow any responses to this entry through the RSS 2.0 feed. Both comments and pings are currently closed.