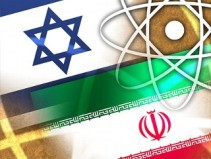 Two days before his inauguration, President of Iran, Hasan Rouhani said, “The Zionist regime has been a wound on the body of the Islamic world for years and the wound should be removed”. A bit similar words were given by former President Ahmadinejad for years. On the other side Israeli Prime Minister Netanyahu went on U.S television to remind the world that the threat from Iran remains very much alive. Speaking on “Face the Nation,” Netanyahu warned that the Islamic Republic is once again approaching a nuclear redline, and hinted that if the United States doesn’t take action soon, he will. Israeli leaders have been issuing such alarms for almost a decade now.

While military strike still is a serious thread the secret war between Israel and Iran has been going on the whole time. From Israeli side well known actions are assassinations of some key figures in Iran’s nuclear program, Stuxnet and some strange blasts and explosions in Iran’s nuclear facilities. However its pleasure to find out that some civil activities will give hope that a non military development might be possible.

Recently in July 2013, Iranian film director Mohsen Makhmalbaf, an Iranian film maker and member of the Iranian political opposition who has won some 50 awards, visited Israel as a guest of honor at the Jerusalem Film Festival. He received an award for his efforts to promote freedom and democracy in Iran and hosted a film screening of his recent film The Gardener – a film that explores the Bahai community in Israel. The Gardener is the first Iranian film since the 1979 Iranian Revolution to be filmed within Israel. A number of his other films were also highlighted at the Jerusalem Film Festival. Crowds of Israelis honored him with standing ovations. Makhmalbaf was the first high-profile Iranian artist and former revolutionary to visit the Jewish state since the 1979 Islamic Revolution in Iran.

Born in Tehran 56 years ago, the maker of 20 films took part in the demonstrations against the shah of Iran which saw him arrested at the age of 17 and spending more than four years in prison. After the 1979 Islamic revolution he was able to concentrate on cinema, but his approach and attempts to prevent censorship angered the new authorities. Makhmalbaf was forced into exile in Afghanistan and Tajikistan, where he remained underground, before moving to Paris for four years. He now lives in London.

“On many occasions the Iranian authorities sent killers after me. I narrowly escaped a grenade attack in Afghanistan. In Paris I lived 24 hours with 24 bodyguards,” he said.

All of his films and 30 books are banned in Iran, but his movies do find their way in through black market DVDs, satellite television or YouTube.

“After my visit to Israel, I’ll probably face a campaign accusing me of being a Mossad or CIA agent,” he predicted. (Source and more in Arutz Sheva)

Makhmalbaf came to Israel despite the fact that he could face up to five years in prison for such a visit should he ever decide to return to Iran. According to Makhmalbaf, he made this film in Israel “just to provoke the fundamentalist elements in my country.”

In response to Makhmalbaf’s visit to Israel, Javad Shamghadri, one of the authorities of the Ahmadinejad-controlled cinema agency, ordered the withdrawal of all of Makhmalbaf’s works from Iran’s cinema museum. Also a group of Iranian scholars, artists, journalists and activists who are deeply concerned by the decision of Makhmalbaf to take part in the Jerusalem International Film Festival as they see that his participation directly violates the International call for Boycott, Divestment, and Sanctions (BDS) of the State of Israel campaign issued by Palestinian civil society in 2005, as well as the specific call for Academic and Cultural Boycott of Israel issued in July 2004.

Still, Makhmalbaf says he is “proud to have paved the way for Iranian cinema in Israel. Boycotting and writing statements does not solve anything. It only leads to war. We have to get to know each other through art, literature, and cinema, so we can become friends and end the hostility. That’s the reason I filmed my latest movie ‘The Gardener’ in Israel.” And, he adds, he hopes that someday soon, Israeli filmmakers will be able to shoot films in Iran.

In an interview by Payvand Iranian News Mohsen Makhmalbaf answer to critics e.g as follows:

“However, I am very happy for a discussion to have started and I believe we have to elevate the level of the conversation. My point is that religious enmity and hatred, particularly in the Middle East, are threatening the security of the whole world. By traveling, by starting a dialogue between different ethnic and religious groups and creating bonds of friendship between the opposing sides, we have to try to reduce this hatred and religious prejudice. Turning away and boycotting worsens the hatred.”

“Man lives on the planet Earth. Communities need to communicate with one another. Cultural interaction can clear the way for solving financial and political crises. For sixty years, we went along with boycotting. It is time to start a cultural dialogue, especially on the topic of peace. In Israel I said, ‘I love your people and as far as I have seen, Iranian people also love Israelis.’ There is no problem between the two nations; it is a political issue between the governments.”

On the other hand more than 80 Iranian scholars, opposition group members, and human rights activists openly declared their support of Mohsen Makhmalbaf‘s decision to come to Israel by following words:

In gratitude for Mohsen Makhmalbaf’s peaceful efforts in Israel

Iranian director, Mohsen Makhmalbaf, who recently attended the Jerusalem Film Festival to screen his latest film “The Gardener”, received a special award from the festival organizers for “artistic achievements” and “for his long battle and struggle for democracy and freedom” in Iran.

Upon receiving the award, Mr. Makhmalbaf stated: “If politics separates us, art, on the other hand, can heal these rifts and distances and unite us in our peaceful efforts.”

He further mentioned that he wanted to dedicate his award to “artists, politicians, intellectuals and all the people in Iran and Israel who have worked for peace and friendship between two nations and believe in it.”

Mr. Makhmalbaf added in Jerusalem that he likes the people of Israel but an attack by Israel against Iran would only worsen the situation.

He stated that instead of a military attack, Israel should support the “democratic forces” in Iran which struggle for freedom.

His prediction has come true in a way. Besides the media that is owned or affiliated with the Islamic Republic of Iran, a number of other Iranians inside and outside Iran (under the guise of peace and human rights activists and intellectuals), have published a letter condemning Makhmalbaf‘s trip to Israel “with grave concern” as it “violates human conscience” and stated that his presence at Jerusalem Film Festival was tantamount to support of the “apartheid politics of the Israeli government.”

It is at this juncture of time, and under the circumstances outlined above, we sign this letter to support and applaud Mohsen Makhmalbaf’s bravery for breaking the taboo of visiting the state of Israel and conveying the message of friendship between Iranian people and people of Isreal.

We believe that supporting the rights of the Palestinian people is not a sufficient justification to criticize an Iranian director’s professional trip to Israel.

We still remember those Israeli and Iranian citizens who last year launched a campaign of friendship between the two countries and exchanged written and video messages stating that they “loved “ each other just when it seemed that the chances of an Israeli strike against Iran was increasing.

We condemn the politics of war whether it is advanced by officials of the Islamic Regime or some officials in Israel. Instead, we endorse, support and welcome, the position of Mohsen Makhmalbaf that instead of a military attack, Iran’s “democratic forces” should be supported.

Just like Mohsen Makhmalbaf, we are unafraid to stretch out our hands in friendship with the citizens of Israel and believe that art can be a tool that brings people together regardless of people’s racial, linguistic and political differences.

We believe that instead of criticizing Mohsen Makhmalbaf’s trip to Israel, we should call him the ambassador of peace and friendship between the people of Iran and Israel. 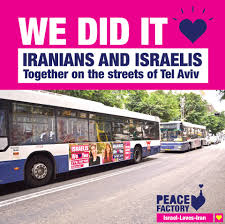 70 buses rode the streets of TelAviv carrying message for peace

There is many Iranians who support peace with Israel as seen in an article published in pages of United with Israel – a global grassroots movement:

“I think there are many Iranians who live for the day that Iran has diplomatic relations with Israel,” says Mhyar Shams Ahmadi, who was born in Tehran 28 years ago but now lives in Toronto. “In my view, if you just look at relations between Iran and Israel, it is clear that it is in fact the ruling regime in Iran that is preventing diplomatic relations.”

Ahmadi is inspired by the high-tech advances and Western-style democracy that Israeli society has achieved. “Israel is already serving as a model for Iran, and other countries, on how to treat women and minorities,” he says. “Much like Canada, Israel does not oppress its citizens and allows them to think freely without fear of being persecuted no matter what your religion or beliefs are.”

Ahmadi criticizes Iranian leadership’s view of Israel as “little Satan” to the US’ “big Satan.” He says he is embarrassed and saddened that the present Iranian government remains opposed to Palestinian-Israeli peace negotiations. “Even with a new president, it is evident that Iran’s government hasn’t changed at all, and it is no surprise that Iran still continues to fail to live up to their international obligations,” he said.

Other Iranians are a bit more optimistic. “I think that the prospect of Israeli-Iranian relations will look good within the near future, either through the collapse of the regime, or by reform of Iranian politics,” says Pedram, an Iranian presently living in Stockholm, Sweden. “The Iranian and Jewish people have thousands of years of cultural and historical connection with each other and it cannot be broken just because we have an oppressive regime at the moment. I can with strong confidence say that the overwhelming majority of Iranians, both inside and outside the country, strongly support not only peace with Israel but also better relations in general.”

I highly appreciate people like Mohsen Makhmalbaf who have courage to act outside the box of their regime. Happily the Jerusalem Film Festival was not an isolated case. At grassroots there has been over one year a movement labelled as ”Israel loves Iran”. It is aline of communication between the people of Israel and Iran – a bridge in the Middle East between the people. The mission of this mostly virtual group is to break the wall of fear, built a bridge of communication as war happens where there is no communication.”And the only thing we can do…is communicate. Get the lines open. That’s hope…and that’s easy. Because of the internet” says in their mission statement. Israel loves Iran Facebook community can be found from here! 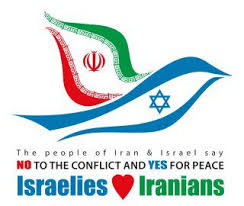 Some of my previous articles related to nuclear Iran: 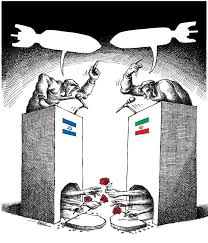 This entry was posted on Saturday, August 3rd, 2013 at 7:58 am and is filed under Arab St., crisis management, Iran, Middle-East. You can follow any responses to this entry through the RSS 2.0 feed. Both comments and pings are currently closed.

2 Responses to Iranians And Israeli Instead Of Israel Vs. Iran