Hamas and Israel on Verge of the Deal

“This agreement is no longer just rumors or blabber, but will be signed any minute,” (Walid Awadh, a member of the political office of the Palestinian People’s Party in Gaza) 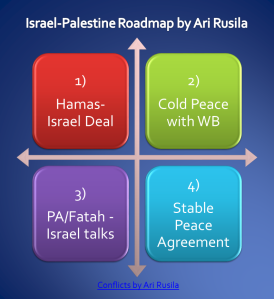 According to the Times of Israel, Hamas and Israel have essentially agreed on a long-term cease-fire. Hamas is about to sign a “comprehensive” agreement with Israel for the lifting of an eight-year blockade placed on the Gaza Strip in return for a long-term ceasefire The gist of the deal is that Israel will end the blockade and allow thousands of Palestinian day laborers to enter Israel. Gaza will import items through a Cyprus port overseen by NATO representatives (until a floating offshore port can be developed) and cease all rocket fire and tunneling for eight years. A prisoner swap may be in the works too.  Hamas-Israel Deal could pave way for the ‘Cold Peace Solution’

Israel Prime Minister’s Office gave following statement on 18th Aug. 2015: “Israel would like to officially clarify that it is not holding any meetings with Hamas, neither directly, nor via other countries, nor via intermediaries.” However – in addition to rumours described in my April 2015 article  Gaza State Under Construction, West Bank Remains Bystander 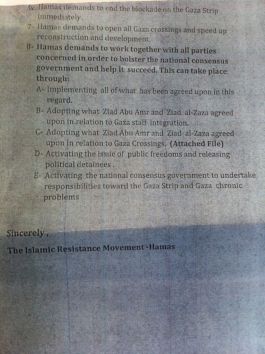 – the original sources of last developments have been a Turkish official, few days earlier, it was a “knowledgeable source” in the Israeli defense establishment and before that, it was a U.S. State Department official. All confirmed that Israel and Hamas are discussing a long-term cease-fire deal. Already in April it was estimated that official representatives of the Israeli government and defense establishment have been holding a real dialogue even months with the Islamic terrorist group – Hamas – in a bid to reach a long-term calm on the Gaza border. These secret talks have been “partly direct” and partly through Qatari and European mediators. This information was based on an YNet article.

In April 2015 it was claimed that from the Israeli side the person pushing for talks with Hamas is the coordinator of the government’s activities in the territories (COGAT), in cooperation with new IDF Chief of Staff Gadi Eisenkot , with assistance from the political leadership. The official Israel continues to conceal the dialogue with Hamas: It would have disrupted the elections, it’s not good for the image of a right-wing government, and it gets in the way of continuing to define Hamas as a terror organization in the world. (Source and more in Ynet)

In an interview- according The Times of Israel – with Hamas daily al-Resalah, Yasin Aktay, an adviser to Turkish Prime Minister Ahmet Davutoglu and deputy chairman of the ruling Justice and Development Party, said that Hamas’s political leader Khaled Mashaal came to Ankara last week to update the Turkish leadership on the details of an agreement reached with Israel. According Israel Hayom [18th Aug. 2015] Hamas officials told Arab media outlets that significant progress had been made in recent talks in Qatar between Hamas leader Khaled Mashaal and former Middle East Quartet envoy Tony Blair about the possibility of a long-term truce deal. Reports also cited a Turkish official as saying progress had been made toward such a deal between Israel and Hamas. According to the official, the deal would include the lifting of the blockade on Gaza. According to the reports, Gaza will be allowed to import merchandise through a “floating port” located 3 kilometers (1.8 miles) off the coast. An intermediary port will be established in Cyprus, where all Gaza-bound merchandise will be scrutinized by NATO representatives. 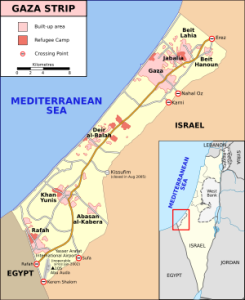 Meanwhile, progress has been made in reconciliation talks between Israel and Turkey yet differences remain on several issues, the London-based Asharq Al-Awsat newspaper reported on Tuesday. The report quoted a Turkish Foreign Ministry official as saying that Israel had agreed to significantly ease the blockade on Gaza — which has been one of Turkey’s demands in the reconciliation talks.

According to Hamas daily al-Resalah, Israel would like to see a larger package deal that would include the exchange of “live and dead Israeli prisoners” held by Hamas — likely a reference to Ethiopian-Israeli citizen Avraham Abere Mengistu and a Bedouin man who both entered the Gaza Strip voluntarily, as well as the remains of Israeli soldiers killed during Operation Protective Edge last summer — in return for Hamas prisoners jailed by Israel.

Israeli Arabic-language website al-Masdar reported on 16th Aug. 2015 that Hamas’s leadership held a meeting in Gaza on 14th Aug. 2015, specifying the deal’s details. According to al-Masdar’s unnamed Hamas source, Israel has also agreed to allow in thousands of Gazan day laborers through the Erez crossing in return for Hamas’s agreement to stop launching rockets into Israel and digging subterranean attack tunnels underneath the border for a period of at least eight years. Hamas’s Shura Council, the movement’s highest deliberative body, endorsed the agreement following a three-hour debate.

The reported agreement is opposed by the PLO because it wasn’t consulted, and because it would “eventually detach Gaza completely from the West Bank and Jerusalem,” said one Fatah figure. Hamas officials, headed by Hamas leader Ismail Haniyeh, have been dispatched to Egypt, Qatar, and Turkey to discuss the deal. But the agreement is facing domestic opposition from without, as Palestinian factions consider it a potential danger to the political unity of Gaza and the West Bank as stipulated by the Oslo Accords. 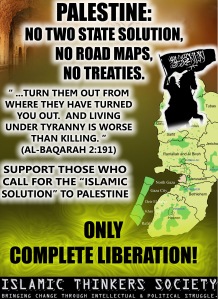 Walid Awadh, a member of the political office of the Palestinian People’s Party in Gaza, said that his party, like all other PLO factions, is opposed in principle to the deal reached between Hamas and Israel. The agreement, carried out unilaterally by Hamas without consulting the PA, strengthens the political divide with Fatah and will eventually detach Gaza completely from the West Bank and Jerusalem, he argued. “Gaza faces an unknown future,” he said. “This agreement leads us from political divide to [Gaza’s] secession, making it impossible for Gaza to be part of the future Palestinian state.”Awadh said the agreement is being finalized “far from the Gaza Strip” by Hamas’s overseas leadership in coordination with Qatar and Turkey. Notifying the PLO organizations in Gaza was only done in order to market the agreement and portray it as a result of local consensus. Most factions in Gaza support a ceasefire with Israel, Awadh stressed, but insist that it be the result of “unified Palestinian representation, tying the future of Gaza to that of the West Bank.”

Awadh’s dismay with Hamas was expressed even more bluntly by Fatah spokesman Osama Qawasmi over the weekend. “Why insist on a naval passageway to the entire world but the West Bank?” Qawasmi wondered in a press statement published on Fatah’s official website. “Why has the land corridor with the West Bank, known as the ‘safe passage,’ not been proposed before anything else, given that the PLO delegation raised the issue forcefully? Is Gaza a humanitarian issue [only] or is it part of the Palestinian homeland?”

The eight-year split between Fatah and Hamas aka the Islamic Resistance Movement has cut off Gaza and its 1.7 million people from the West Bank and e.g from negotiating efforts; instead Hamas has implemented few military campaigns against Israel and Gaza still suffers from the last conflict Summer 2014.

Hamas is consolidating its grip over the Gaza Strip and making plans to turn it into a separate state. Palestinian Authority leader Mahmoud Abbas and Fatah consider the purported plan a “severe blow” to the two-state solution and unity among Palestinians. As the U.S. Administration and the international community continue to push for a two-state solution between Israel and the Palestinians, Hamas seems to be working toward establishing an independent state of its own in the Gaza Strip. 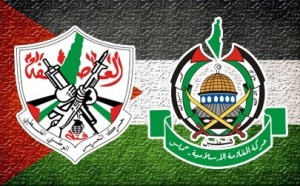 It might be that the international community must define their two-state solution with new content including two Palestinian state – one Islamist emirate in the Gaza Strip and an other Fatah-controlled wannabe state in the West Bank.

Earlier on April 2015 in my article Gaza State Under Construction, West Bank Remains Bystander I estimated that this possible deal between Hamas and Israel has a risk that internal disagreements between Hamas’ political and military wings could endanger it. Ezzedeen Al-Qassam Brigades might take advantage of instability within the Hamas to carry out attacks on the border with Israel without getting a green light from Hamas’ political leaders. Struggle inside Hamas is not the only battlefield in Gaza. A group calling itself Supporters of the Islamic State in Jerusalem has continued to challenge the Gaza-ruling Palestinian entity Hamas. 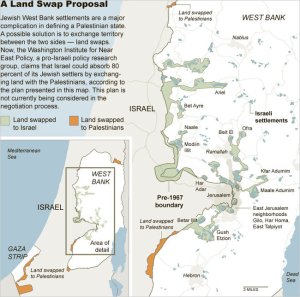 I still consider a two-state solution be possible. The final status agreement has been very close at least since Beilin-Abu Mazen understandings / agreement / plan (1995) where nearly all issues were agreed. The Olmert proposal (2008) was probably the last serious try (both plans can be found from my document library ) If however it can’t be negotiated so there is possibilities to make regional solution; I for example have long propagated the idea of the “Three-State-(return) Option” ( e.g. in ”The Three-State Option could solve Gaza Conflict” ). Also – if two-state solution is de facto cul-de-sac and if there is no readiness to regional solution so a unilateral ‘Cold Peace solution’ from my perspective is the best option especially if Hamas-Israel Deal will come true.

Israel could independently implement a ‘Cold Peace Solution’, a minimal level of peace relations,  to ensure its character as a Jewish and democratic state, by fixing a border between Israel and a future Palestinian state in the West Bank unilaterally. Creating a reality of two states for two peoples by separation into two nation states would be based on voluntary Israeli concession of territories outside of the large with Israel on the route of a permanent border on the basis of agreed-upon land swaps or independently in case negotiations does not take place. In the event that negotiations are not renewed, the temporary border will become permanent. As long as there is no agreement, the IDF and Israel would retain control of the outer borders and surrounding areas of the territories to be evacuated by Israelis who would be resettled within the state’s temporary borders. This kind of unilateral “cold peace” solution – that Israel annexes all Judea and Samaria (West-Bank) inside security fence and draws all outposts inside fence and Palestinians can do whatever they want in remaining territory – in my opinion might – in the course of years – develop to permanent state of affairs and thus end Israeli-Palestinian conflict.  An example could be the peace treaty between Egypt and Israel signed in 1979 which most Egyptians view as a cold peace;  retrospectively not so bad deal anyway. 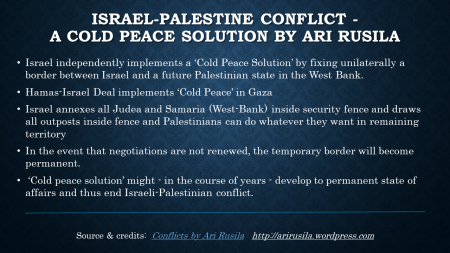 This entry was posted on Tuesday, August 18th, 2015 at 4:10 pm and is filed under Conflicts, Middle-East. You can follow any responses to this entry through the RSS 2.0 feed. Both comments and pings are currently closed.

4 Responses to Hamas and Israel on Verge of the Deal