he IDF’s intelligence on Hamas’s military wing in Gaza has increased greatly over  the past two years, and the Southern Command’s war preparations have been enhanced as a result, a senior military source said on 14th April 2016 according Jerusalem Post.

In Gaza, the military wing is gradually growing in power at the expense of the political wing. Figures like Muhammad Deif, who leads the military wing, Yihye Sinwar, who was released in the Gilad Shalit exchange and Marwan Issa, are taking power away from Hamas’s political wing, as well as from overseas leader Khaled Mashaal.

Hamas military wing members receive military training also in Iran and earlier in Syria, in addition Hamas has military training camps for children who also receive hate indoctrination from public media and in schools and camps. The Izz al-Din al-Qassam Brigade is a separate armed military wing, which has its own leaders who do not take their orders from Hamas. Some cells have independent links with the external leadership, enabling them to bypass the hierarchical command chain and political leadership in Gaza and they do not tell their plans in advance to political wing.

Hamas’s military wing is helping terrorist operatives in West Bank as well the ISIS-affiliated Sinai Province group, transferring it funds, and caring for its injured, as well as trying to smuggle weapons through the group. Hamas’s military wing is in charge of police appointments, a task that once belonged to the political wing.

The Southern Command is carefully monitoring Hamas’s 25 regional battalions and has prepared detailed files on each one as part of preparations for ground forces that could, in the event of a future escalation, be sent in to Gaza to land “painful strikes” on Hamas, according to the source. “We did not have this level of knowledge in Operation Protective Edge [in 2014],” the source said. “Our brigade, battalion, and company commanders are assigned regions, and will know many things that will assist them in destroying their targets,” the high-ranking officer added according Jerusalem Post .

The Southern Command has spent the past year and a half making intensive preparations for potential future conflicts. Plans include spreading out a “stronger defense” of southern communities, and a better layout of staging areas, that were targeted by Hamas in the previous conflict. All IDF battalion commanders have, in recent weeks, completed courses dedicated exclusively to the topic of “how to defeat Hamas, fighting in populated areas and the rapid build-up of forces.

Hamas’s military wing is busy with its own preparations, using the current quiet to build up its own offensive capabilities. This includes an intensified training for Hamas’s elite Nuhba forces, which make up a quarter of Hamas’s 20,000-strong armed members, and who are trained to launch cross-border raids into Israel. The Nuhba Force has increased its size and scope of activities, as well as its training, Hamas is also building up its naval commando unit and has begun assembling a drone unit. [Source: Jerusalem Post ].

Hamas remains in a state of distress and economic crisis, unable to pay members in time, and failing to smuggle many weapons from Sinai. Hamas’ economic well-being was in large part dependent on its system of smuggling tunnels snaking underneath the Gaza border with Egypt.

The tunnels were first constructed immediately after Israel’s disengagement from the Sinai Peninsula, as part of the Camp David agreement between Israel and Egypt. But digging got more intense after Israel declared a blockade on Gaza after Hamas won the 2006 Palestinian elections. Hamas’s government started to flourish on what economists called the booming “tunnel economy” until current Egyptian President Abdel Fattah al-Sisi joined Israel in trying to destroy it. 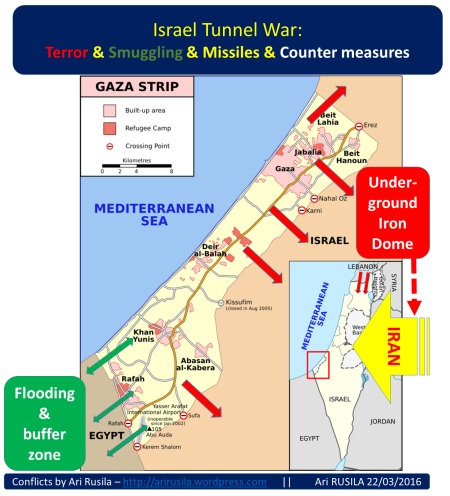 The supply lines that have fed it cash, arms, goods, luxury items, fuel, and cement for its terror-tunnel industry suddenly were gone. These goods, which were smuggled into Gaza at obscenely low prices at the expense of Egyptian citizens, were no longer flowing in due to the closure of the tunnels. The economy of Hamas is weakening as Egypt has closed main part of over one thousand smuggling tunnels on Gaza border; before that Hamas administration got remarkable income from smuggling activities. [More in Gaza Blockade – It’s Egypt not Israel! ]

Since beginning of March 2016, Hamas has been forced to slash by two-thirds the wages paid to members of its military wing: each fighter now takes home $200 instead of $600 per month, and officers used to earning $1,000 must be satisfied with $350. DEBKA’s military and intelligence sources claims that the terrorist group has moreover halted recruitment for lack of funds to pay, accommodate or train new fighters. The cash crunch has also hit the Hamas government. Most of Gaza’s municipal services are suspended because city officials have not been paid. Iran’s boycott on military and financial assistance to the Gaza Strip was clamped down in mid-2015 over Hamas’ refusal to line up behind Iran’s unqualified endorsement of its allies, Syrian President Bashar Assad and Yemen’s Houthi rebels.

Hamas doesn’t currently have a patron in the Arab world. The Muslim Brotherhood is weak in the region: Jordan recently shut down their branches; they’re being chased out of Egypt; Kuwait and Saudi Arabia have outlawed them. Egypt has strengthened its grip on Gaza and won’t tolerate any violence on Hamas’s part in the near future.

According Channel 2 report (March 2016) the Israeli security establishment estimates that Hamas is not presently seeking a military escalation with Israel. The report noted that the assessment stands despite the terrorist group’s continued digging and armament of underground tunnels in the coastal Palestinian enclave. 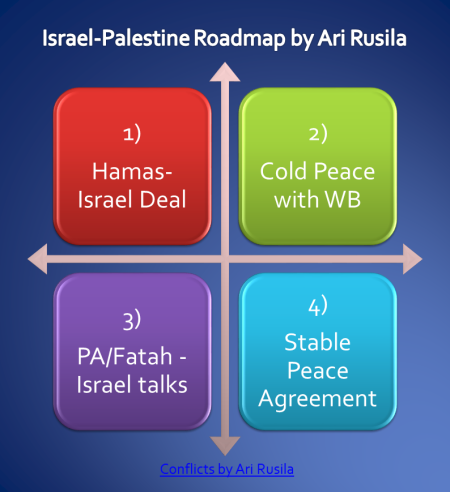 Over one year Hamas has been negotiating with Israel about its plan to turn the Gaza Strip into a separate Palestinian entity in a bid to reach a long-term calm on the Gaza border. It might be that the international community must define their two-state solution with new content including two Palestinian state – one in the Gaza Strip and an other Fatah-controlled state in the West Bank. With “official” 2-State Solution there is other 2-State options such as Gaza and Palestine option. Related to possible deal between Hamas and Israel there is a risk that internal disagreements between Hamas’ political and military wings could endanger it. (more e.g. in Gaza State Under Construction, West Bank Remains Bystander, Analysis: Resolving The Israeli-Palestinian Conflict , Sinai Option again and Hamas and Israel on Verge of the Deal). 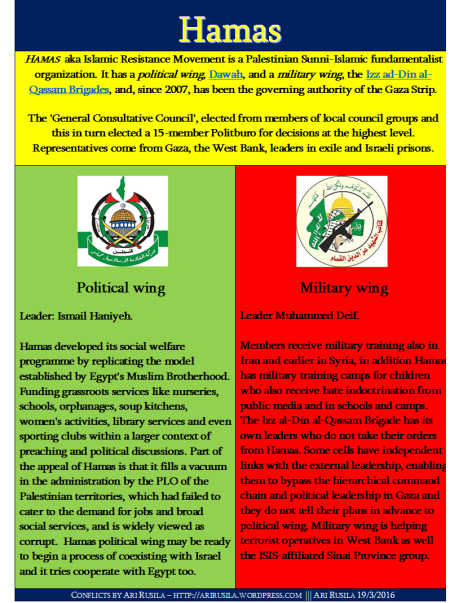 This entry was posted on Tuesday, April 19th, 2016 at 12:22 am and is filed under Conflicts. You can follow any responses to this entry through the RSS 2.0 feed. Both comments and pings are currently closed.