After nearly two weeks of political turmoil, Yisrael Beytenu (the Israel Our Home party) leader Avigdor Lieberman sworn in as Israel’s Defence minister on Monday 30th May 2016 – after cabinet and Knesset approval. The main outcome of political drama might be — an expanded right-wing government that can bolster the Likud’s hold on power for a long time. The turmoil is now heading Labor’s way as opposition leader Yitzhak  [Isaac] Herzog’s rivals are putting his ouster in motion, and Herzog will have hard battle to retain his position as Labor leader. In addition Lieberman’s appointment raises questions about direction of Israeli government related to peace process.

New political development started as Prime Minister Binyamin Netanyahu and Opposition head MK Yitzhak Herzog (Zionist Union) started their talks to bring Herzog’s leftist party into the coalition. The core sticking point between the sides seems to be the diplomatic policies that a joint government would pursue.

According Arutz Sheva Netanyahu refused to allow Herzog to advance his “separation plan” from the Palestinians, which among other things involves cutting off Arab neighborhoods such as Isawiya from the Jerusalem municipality and transferring them to Palestinian Authority (PA) control in a unilateral division of the capital. Herzog has long touted his idea of dividing the capital and making massive concessions, but ironically Netanyahu and his governments have also been accused of enforcing a quiet de facto division of the 3,000-year-old capital of the Jewish people. Aside from the “separation plan,” it appears that Netanyahu was reluctant to give Herzog a free hand in holding peace talks by himself or making announcements about a reduction of construction in Judea and Samaria. According Arutz Sheva Netanyahu’s past two governments have been imposing a covert and informal construction freeze on the region ever since the last failed round of peace talks in 2013.

The reshuffle was triggered last Wednesday [25th May 2016], as instead of announcing a deal with Herzog as many had expected, Netanyahu invited Avigdor Lieberman, head of the right-wing Yisrael Beytenu party, to separate talks aimed at bringing his six Knesset seats into the coalition, which resulted in the appointment of Lieberman as Defence Minister. He replaces Moshe Ya’alon, who has resigned from his post and from Likud.

After Netanyahu/Lieberman agreement last week came new crisis in government as Education Minister and Jewish Home chief Naftali Bennett called for an army official to be assigned to the security cabinet to keep members abreast of important military developments. Jewish Home was prepared to vote against the inclusion of Lieberman into the government if that issue weren’t solved. Indeed the Jewish Home was prepared to split from the government if the reforms were not adopted. After some talks the full cabinet met on Monday 30th and unanimously approved the appointment of Yisrael Beytenu leader and MK Avigdor Lieberman as defense minister and Yisrael Beytenu MK Sofa Landver as immigrant absorption minister and in addition the government members, including party Bennet, receive frequent personal reports of the national security adviser. 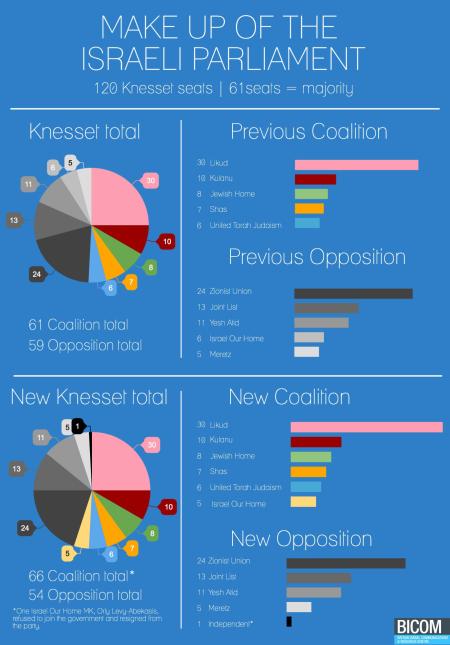 There was a new, although brief, sense of optimism in European capitals that Netanyahu would engage in the beginning of a two-state solution process and restrain settlement expansion. However the horizon darkened again when instead of Herzog’s appointment as foreign minister, Lieberman was appointed defence minister. There is also wider international concerns that the new government would put another nail in the coffin of peace efforts. However Netanyahu has made repeated statements inviting Abbas to meet, saying he is willing to talk with the Palestinian leader “whenever, wherever.” On Wednesday, 25 May 2015, at the signing of the coalition agreements, PM Netanyahu also made the following remarks [according Government Press Office]:

“My government remains committed to pursuing peace with the Palestinians, pursuing peace with all our neighbors. My policy has not changed. We’ll continue to pursue every avenue for peace while ensuring the safety and security of our citizens. I believe the developments in the region have created new challenges for us all. But I also believe that they’ve created new opportunities for peace, and I intend to seize those opportunities. A broader government, a more stable government, will make it easier to do so.”

Immediately following the ceremony, Defence Minister Avigdor Lieberman and PM Netanyahu reaffirmed their commitment towards a two-state solution and endorsed the possibility of a wider regional peace based on the Arab Peace Initiative. The Arab peace initiative refers to a Saudi-spearheaded plan, which would see a pan-Arab rapprochement with Israel, in return for the establishment of a Palestinian state. Minutes after being sworn in, Lieberman appeared at a joint press conference with Netanyahu, who said: “I remain committed to making peace with the Palestinians and with all our neighbours. The Arab Peace Initiative includes positive elements that can help revive constructive negotiations with the Palestinians. We are willing to negotiate with the Arab states revisions to that initiative.” Meanwhile, senior Likud MK Tzachi Hanegbi has been appointed Minister without Portfolio, but will apparently deal with foreign affairs, including any diplomatic initiatives. [Source: BICOM ]

Israeli Foreign Ministry officials travelled on 25th May 2016 to Egypt’s capital Cairo on a two-day visit to lay the ground work for a trilateral peace summit between Israel’s Prime Minister Benjamin Netanyahu, Palestinian Authority (PA) President Mahmoud Abbas and Egypt’s President Abdel Fatah al-Sisi. It has been widely reported that former Prime Minister Tony Blair played a crucial role behind the scenes encouraging al-Sisi to deliver such as speech, and coordinated this effort with Netanyahu and opposition leader Isaac Herzog, who were locked in ultimately failed talks to form a unity government. [Source: BICOM ]

The Egyptians committed themselves, together with other Sunni states, to convene an international conference in Cairo that would jump-start the process — mainly renewal of the bilateral negotiations between the Israelis and Palestinians and turning the Arab Peace Initiative into a working plan.

Related to another international move, the French initiative [France should hold direct Israeli-Palestinian talks at its June 3rd 2016 in Paris on the frozen peace process], PM Netanyahu told his French counterpart that “If you really want to help launch peace, then help us launch direct negotiations with [Palestinian Authority President] Mahmoud Abbas”… “Israelis and Palestinians have suffered too much. It’s time to sit down together and work out our differences so that peace may reign at long last,” Netanyahu told French Prime Minister Manuel Valls. [Source: Jerusalem Post]

Opposition head MK Yitzhak Herzog (Zionist Union) held a Labor faction meeting on Monday 30th , in which he spoke about Avigdor Lieberman’s appointment as Defense Minister as part of his Yisrael Beytenu party joining the coalition government. According Arutz Sheva  Herzog in his speech also addressed Finance Minister Moshe Kahlon (Kulanu), calling for the former Likud minister to take his party out of the coalition government and bring it down. Herzog’s unity talks with Netanyahu fizzled out amid the Labor party head’s demand for a unilateral division of Jerusalem, among other things. [ More about Herzog’s peace plan in Herzog’s Plan: Security Barrier Around the Major Settlement Blocs of West Bank ]

After the resignation of Kulanu Environment Minister Avi Gabbay on Friday 27th, because he objected to the prime minister’s replacing Ya’alon with Lieberman; and after Kulanu chairman and Finance Minister Moshe Kahlon’s tweet that he would veto any attempt to curb the legislative ambitions of the Israeli Supreme Court; Kulanu’s Housing Minister Yoav Galant, has also moved to pull his fledgling party to the left. According to a Jewish Insider report, Gallant spoke to the Conference of Presidents of Major American Jewish Organizations in New York last week and told them his government’s policy was to freeze construction in the Judea and Samaria Jewish settlements. Galant also warned against the emergence of a two-nation state if the 2-state solution is not implemented, and advocated moving in that direction even without cooperation from the PA Arabs. [Source: JewishPress ]

Israel Hayom reported than even before the ink on the Yisrael Beytenu-Likud coalition agreement could dry, Prime Minister Benjamin Netanyahu asked Labor leader Isaac Herzog to join. Netanyahu did it again on Monday, despite (or because of) Herzog’s call for Kulanu leader Moshe Kahlon to take his party out of the coalition. Kahlon has also been actively trying to bring Herzog into the fold. The Kulanu leader is becoming increasingly isolated since Moshe Ya’alon was kicked out of the Defense Ministry and Avi Gabai left the Environmental Protection Ministry. Herzog’s dilemma is also Labor’s and Zionist Union’s dilemma: one part of opposition want to join the coalition, others insist to stay in the opposition.

Avigdor Lieberman [Эве́т Льво́вич Ли́берман] is a Soviet-born [Kishinev, Moldova] Israeli politician who serves now as the Defense Minister of Israel. He has served as Israel’s Minister of Foreign Affairs from 2009 to 2012, and again from 2013 to 2015. He is the founder and leader of the secular-nationalist Yisrael Beiteinu party, whose electoral base are overwelmingly Russian-speaking immigrants from the former Soviet Union. As a result of the arrival in Israel during the 1990s of more than one million Russian-speaking immigrants, Yisrael Beiteinu has regularly played the ‘king-maker’ role in Israel’s coalition governments. Lieberman’s very pro-Russian stance and perceived friendly relations with Putin have also drawn criticism from fellow Israelis.

16 most outrageous statements of Avigdor Lieberman over his provocative past by MEE :

This entry was posted on Wednesday, June 1st, 2016 at 12:18 am and is filed under Conflicts, Israel, MENA. You can follow any responses to this entry through the RSS 2.0 feed. Both comments and pings are currently closed.

One Response to Israel Govt. Reshuffle Done – Lieberman Instead Herzog