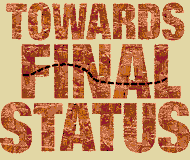 Beilin had worked as a journalist and as a lecturer in political science before going into politics in the mid-80’s. He quickly established himself in the Labor Party’s Young Guard as a militant moderate and as an advocate of equal rights for Israel’s Arab minority and reconciliation with the Palestinians.Right at the beginning, Beilin went straight to Arafat (while he was still in Tunisia) to ask him to join in an effort to work out principles for a final agreement between Israel and the Palestinians. Arafat agreed and delegated the job to his closest advisor, Mahmoud Abbas, known also as Abu Mazen.

From the democratic point of view Yossi Beilin’s action was questinable.  Behind the backs of an elected prime minister (Yitzhak Rabin) and foreign minister (Shimon Peres), a deputy cabinet minister over a period of two years held fateful talks with the national enemy. The agreement was negotiated in secret in Oslo and Stockholm by a team of Palestinian and Israeli negotiators, under the supervision of Beilin for Israel, and of Abu Mazen (Mahmoud Abbas) for the Palestinian side and was finalized in October 1995.

Yossi Beilin returned to get the approval of Prime Minister Rabin.    However, by the time Beilin had returned to Israel, Yitshak Rabin had been assassinated by Yigal Amir. Shimon Peres was unwilling to go forward with the agreement, and likewise, apparently, Abu-Mazen was not able to find support for it on the Palestinian side. However, many of the ideas contained in this agreement were carried forward to other negotiations, and are reflected in draft agreements regarding refugee status and Jerusalem, as well as status of the settlements and the principle of territorial exchange.

But when the document was leaked to the press, Abbas tried to distance himself from it and to minimize its importance. The document was never formally published and never adopted by the Israelis or the Palestinians. PLO officials disavowed its existence, but the proposal found its way into circulation. Although the proposal was never completely accepted, some of the ideas presented in it were thought to be good compromises in resolving certain issues in final status negotiations later on.

In January 1997, Beilin and Michael Eitan, a Likud Member of Knesset, announced that they had arrived at a set of guiding principles for Israel’s negotiating position in the final status talks, quite similar to the reported details of the Beilin-Abu Mazen Plan. The Beilin-Eitan Agreement was released as the Likud-Labor consensus on a permanent agreement with the Palestinians. Neither the Likud nor Labor leadership has endorsed the Beilin-Eitan plan.

Beilin and Abu Mazen managed to produce what seemed to be the first solid evidence that the Israeli-Palestinian conflict is soluble. They  had drawn up Documents solemnly declaring that no serious problem stood in the way of a peace treaty with the Palestinians – not Jerusalem, nor Jewish settlements in the territories, nor the Palestinian demand for a right of return for their refugees. The document shows what the real back channel work can achieve.

The text below – as well in my document library – is unofficial, but is believed to be substantially correct. It is believed that in addition, there may have been informal letters exchanged concerning the status of Jerusalem and other matters that were not made public.

“Beilin – Abu Mazen document” – Framework for the conclusion of a final status agreement between Israel the PLO – Non-UN document (31 October 1995).

This entry was posted on Sunday, March 8th, 2015 at 6:41 pm and is filed under Middle-East. You can follow any responses to this entry through the RSS 2.0 feed. Both comments and pings are currently closed.