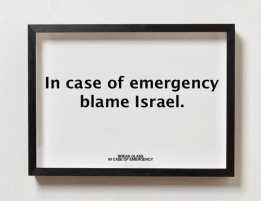 When fragile Minsk II for Ukraine is ‘to be or not to be’ stage, while 21 Ethiopian Christians were beheaded in Libya and while hundreds of refugees drowned in the Mediterranean and while there the increasing chaos in the Maghreb region and in the Middle East with increasing refugee problem, when Palestinians are being brutally murdered by ISIL in refugee camps in Syria, so during these ongoing conflicts it might be difficult to decide about priorities of EU foreign policy. However EU Foreign ministers found an easy and cheap solution – their top priority is labelling Israeli products from the disputed territories (West Bank).

16 of the European Union’s (EU) 28 foreign ministers co-signed a letter to EU foreign policy chief Federica Mogherini, urging her to advance the creation of guidelines to separately label goods produced in the West Bank as part of an economic offensive on Israel. The labeling plan was first mooted in 2012, but the 16 member states told EU foreign affairs head Federica Mogherini it was now time to press ahead as part of efforts to force Israel to divide in a “two state solution.”

When the whole MENA region risks falling into an abyss of war and genocide EU foreign ministers choose to attack the only stable democracy in the region, namely Israel. And this attack even does not help Palestinians as its effect might be totally opposite.

In response, a senior Israeli diplomat told the EU “labeling products from Judea and Samaria is a yellow badge,” referencing the “Jude” stars the Nazis forced Jews to wear during the Holocaust. One should note that the letter was signed in same week when it was Holocaust Remembrance Day in Israel.

The letter was signed by Austrian Foreign Minister Sebastian Kurz and drafted by his Belgian counterpart Didier Reynders who also signed it. UK, France, Italy, Spain, Sweden, Malta, Ireland, Portugal, Slovenia, Croatia, Finland, Denmark, The Netherlands and Luxembourg were the other signatories.

The number of Palestinians working for Israelis on either side of the Green Line doubled in the last four years and now make up 2.2 percent of all workers in the country, according to the Bank of Israel’s upcoming 2014 annual report. The 92,000 Palestinians who work for Israelis make on average NIS 198 per day, while their peers in the Palestinian territories make just 45% of that, on average, or NIS 91 per day, according to the report. According to a Palestinian Central Bureau of Statistics report published in February 2014, there were 105,200 Palestinians employed in Israel, including 20,200 in the settlements. (Source: Jpost ) 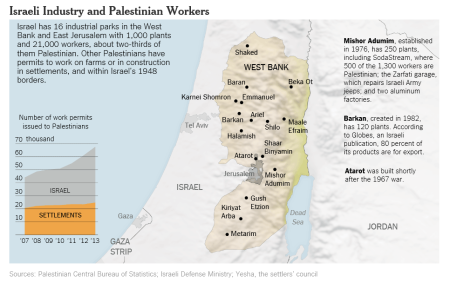 According to Israeli law, Palestinian workers are entitled to employment terms and rights guaranteed by Israeli labor laws. Based on a 2007 Supreme Court ruling, they should enjoy the same rights enjoyed by Israeli workers.

The September 21 [2014] Al-Hayat Al-Jadida article, translated by Palestinian Media Watch, said that “whenever Palestinian workers have the opportunity to work for Israeli employers, they are quick to quit their jobs with their Palestinian employers – for reasons having to do with salaries and other rights.” Wael Nazif, CEO of the Union of Palestinian Workers’ Organizations in the Jericho district, said it was “inconceivable that the Palestinian worker should receive his full rights from the Israeli employers but not from the Palestinian ones.” Surveys and interviews conducted by Al-Hayat Al-Jadida clarify that the salaries of workers employed by Palestinians amount to less than half the salaries of those who work for Israeli employers in the areas of the Israel-occupied  West Bank, which house factories, tourist facilities and agricultural lands. Although the Palestinian Authority has criminalized working in the settlements but given the high unemployment rate PA do not enforce the law that criminalizes work in the settlements. 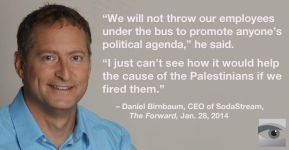 There are 15 industrial zones in territory Israel seized in the 1967 war. They have about 1,000 plants — sophisticated aluminum and food manufacturers as well as tiny textile and furniture workshops — that pump roughly $300 million into the Palestinian economy through salaries .

The proposed labelling of Israeli goods from the disputed territories is giving supporting message to the growing anti-Israeli and anti-Jewish sentiments in Europe, while EU instead should promote cooperation between Israelis and Palestinians. The letter might reflect EU frustration over the re-election of Prime Minister Netanyahu and his recent remarks on the difficulties of creating a Palestinian state in the current circumstances.

One should note that the employment of Palestinians, including refugees, is one of the main problems that must be solved if the stability of the region is to be ensured. Instead of BDS foreign investment to West Bank and Gaza should be encouraged; restrictions on marketing West Bank and Gaza produce in Israel, Europe and the rest of world should be removed to create employment opportunities for the Palestinians. Beside salaries Israeli enterprises provide rare opportunities for coexistence between the two peoples.

P.S:  The BDS  poster below can be used also opposite way – as shopping list of Israeli products 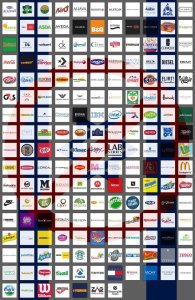 This entry was posted on Thursday, April 23rd, 2015 at 1:02 am and is filed under EU, MENA. You can follow any responses to this entry through the RSS 2.0 feed. Both comments and pings are currently closed.

One Response to Top Priority of EU Foreign Policy: A New ‘Jude’ Badge