The massive ‘Juniper Cobra 2016’ exercise, a US-Israel air defense drill, concluded 3rd March 2016. The drill ended just two days after Israel’s Defense Ministry announced it would be enhancing the capabilities of David’s Sling, a system designed to handle Iranian-grade missiles. The drill is the first of its kind to include David’s Sling, which is expected to come fully online during 2016, and also the first such drill involving six different air defense systems: The US linked its Aegis, Terminal High Altitude Area Defense (THAAD), and Patriot systems with Israeli Arrow 3, David’s Sling, and the Iron Dome in a single simulation, for the bi-annual drill, the IAF source said.

Juniper Cobra is the eighth in a series of biennial exercises between the two militaries dating back to 2001, and is an important part of the training of both the US EUCOM and the IDF. A five-day combined military exercise of Israel and the United States, it is built to provide training in case of a ballistic missile attack from Iran. Sources: IHS Jane’s , Jerusalem Post and IDF

In December 2015, Israel and the U.S. Missile Defense Agency celebrated successful tests of two new ballistic missile defense systems — David’s Sling, which is designed to intercept short- and medium-range threats, and ­Arrow-3, which is intended to stop long-range attacks and knock out enemy targets in space by deploying “kamikaze satellites,” or “kill vehicles,” that track their targets. David’s Sling and Arrow-3 will join Iron Dome and the existing Arrow-2 in coming months.

David’s Sling is considered the most innovative and revolutionary among interceptor systems in the world. This system, which will be a part of a multi-layered defense system being developed by the Missile Defense Directorate in collaboration with the Air Force, would allow Israel to deal more effectively with a wide range of current and future threats to its safety. The system is designed primarily to handle the kinds of rockets and missiles, built by Iran and Russia, that are now in the possession of the Hizbollah militia in Lebanon and the Syrian regime of Bashar al-Assad. Beyond the threat posed by the splintering of Syria, Israel is worried that Syrian missiles could be transferred to Hezbollah or acquired by the Islamic State or al-Qaeda. In a recent speech, Hezbollah leader Hasan Nasrallah threatened that his militia’s missiles could strike ammonia storage tanks in Israel’s Haifa port in a future showdown with Israel, warning that the damage would be equivalent to an atomic bomb and could kill 800,000 people.

The delivery process is gradual, according to David’s Sling development plan, and is expected to go on for a few weeks. In the first phase, the project’s managers began delivering the interception, command and control, and radar systems. The IAF will now start testing the performance of all of the system’s components, following which the system will be declared operational. 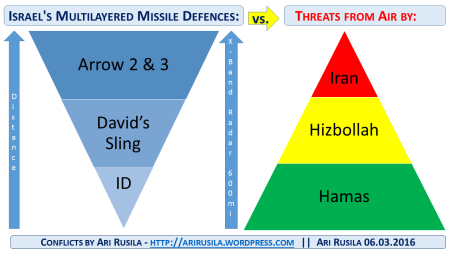 The Israeli defense establishment and its American partners have designed a layered system that will allow the Jewish state to respond to simultaneous attacks from multiple fronts — the relatively crude homemade rockets lobbed by Hamas from the Gaza Strip, the midrange rockets and missiles fired by the Shiite militants of Hezbollah from Lebanon, and the long-range ballistic missiles being developed by Iran that could carry conventional or chemical warheads. 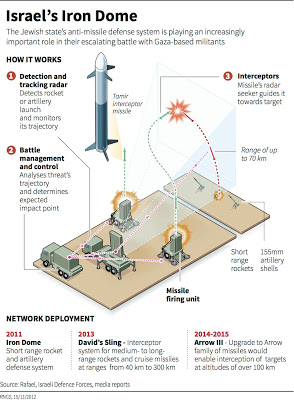 The multi-platform system includes the Iron Dome, which stops low-accuracy rockets like those fired by Hamas from the Gaza Strip or from the Sinai e.g. by ISIS-Sinai Province (aka former ‘Ansar Bait al-Maqdis’ – ABM) . Recently more Iron Dome batteries have been upgraded. The system’s interception range has been significantly extended over the past two years.

David’s Sling is designed to bridge the lower and upper tiers of Israel’s four-layer active defence network. It will be deployed above Israel’s Iron Dome and below the upper-atmospheric Arrow-2 and exo-atmospheric Arrow-3. It is to be particularly useful in defending against the vast and increasingly precise arsenal of Syrian 302mm rockets and Iranian half-ton warhead-equipped Fatah 110 rockets in the hands of Lebanon-based Hizbollah. It also is designed to defend against Scud B-class ballistic missiles, which can deliver one-ton warheads at ranges of some 300 kilometers.

The successful Arrow 3 interception test carried out in December 2015 has brought forward the system’s initial operating capability date, which is now expected before the end of 2016. The operationalisation of Arrow 3, which is designed to intercept ballistic missiles when they are still outside the Earth’s atmosphere, will complete Israel’s multilayered missile defences.

Additionally, Israel’s new X-Band radar system will allow it to detect incoming missiles from up to 600 miles out, compared to its current radar tracking capability of 100 miles. The system can also calculate the trajectories of rockets and missiles, stopping the incoming projectiles if they are intended for cities, military bases, or important infrastructure, while holding its fire if the incoming projectiles end up landing in unpopulated areas.

“I define the system as pioneering,” Uzi Rubin, the former director of Israel’s missile defence program, told the Post. “Even the United States doesn’t have anything as complex, as sophisticated.” The system will also be able to prioritize incoming rockets and missiles by calculating their trajectories. Some missiles may not be intercepted, if their targets are fields and farms, but projectiles that would hit populated areas or important infrastructure — such as military bases, oil refineries and nuclear facilities — would be stopped.

However Israel’s military leaders warn civilians that no air defense ­system is perfect — or even close to it. “There is no hermetic defense or total security that will intercept everything fired at Israel. In the next real war, rockets will fall on the State of Israel,” said Brig. Gen. Zvika Haimovich, commander of the Israeli air force’s Aerial Defense Division. Source: The Washington Post

When it is complete, Israel’s multibillion-dollar rocket and missile air defense system will be far superior to anything in the Middle East and will likely rival, and in some ways surpass, in speed and targeting, air defenses deployed by Europe and the United States, its developers say. The United States has provided more than $3.3 billion over the past 10 years to support the defensive system, which will be able to knock down not only ballistic missiles but also orbiting satellites. The Israeli missile defense system is being built in partnership with U.S. defense contractors, including Raytheon, Boeing and Lockheed Martin.

Almost all current US aid to Israel is in the form of military assistance. U.S. military aid has helped transform Israel’s armed forces into one of the most technologically sophisticated militaries in the world. U.S. military aid for Israel has been designed to maintain Israel’s “qualitative military edge” (QME) over neighboring militaries. The rationale for QME is that Israel must rely on better equipment and training to compensate for being much smaller geographically and in terms of population than its potential adversaries. U.S. military aid, a portion of which may be spent on procurement from Israeli defense companies, also has helped Israel build a domestic defence industry, which ranks as one of the top 10 suppliers of arms worldwide.

Why Israel’s new defense system is one of the most advanced in the world:

This entry was posted on Sunday, March 6th, 2016 at 1:46 pm and is filed under Conflicts. You can follow any responses to this entry through the RSS 2.0 feed. Both comments and pings are currently closed.