The first trial opened on Sep.15th 2021 at a special court (The Kosovo Specialist Chambers- KSC) dealing with crimes during the 1998-1999 Kosovo conflict.  The first case is against Salih Mustafa, 50, a former pro-independence commander who faces charges of murder, accused of running a prison unit. Prosecutors said victims were fellow Kosovo Albanians who disagreed politically with Kosovo Liberation Army fighters. The KSC has indicted eight suspects, all of whom are in custody at a detention unit in the Dutch seaside town of Scheveningen.

The Kosovo tribunal’s highest-profile suspect is former Kosovo President Hashim Thaci, who resigned in 2020 and turned himself last year to face charges of war crimes and crimes against humanity.  One could note that less than a year ago, Kosovo’s Prime Minister Ramush Haradinaj resigned after he was summoned by the same court on suspicion of war crimes.

Thaçi is from the region of Drenica in Kosovo, which is where the Kosovo Liberation Army (KLA) originated. He studied philosophy in Prishtina before moving to Switzerland, where he joined the KLA  in 1993. He rose through the ranks of the KLA to become leader of the most powerful faction by 1999, during the Rambouillet negotiations. He then joined the interim Kosovo administration after the war.

Thaçi became leader of the Democratic Party of Kosovo (PDK), which won the largest share of the vote in the 2007 Kosovo elections. In 2008, Thaçi declared the independence of Kosovo and became its first prime minister. In 2016 he was elected President of Kosovo. Thaçi has pursued a pro-American policy while in office. There have been controversies regarding Thaçi’s role in the KLA and allegations about him being involved in organized crime. In 2020, the Kosovo Specialist Chambers and Specialist Prosecutor’s Office filed a ten-count Indictment, charging Hashim Thaçi and others for crimes against humanity and war crimes.Thaci, a U.S.-backed national hero, embarked on his political career after leading the KLA’s battle against forces under Milosevic. He has been the dominant political figure in the country since its independence 13 years ago. Thaçi subsequently resigned from his position as president, in his words, in order to “protect the integrity of the presidency of Kosovo”. 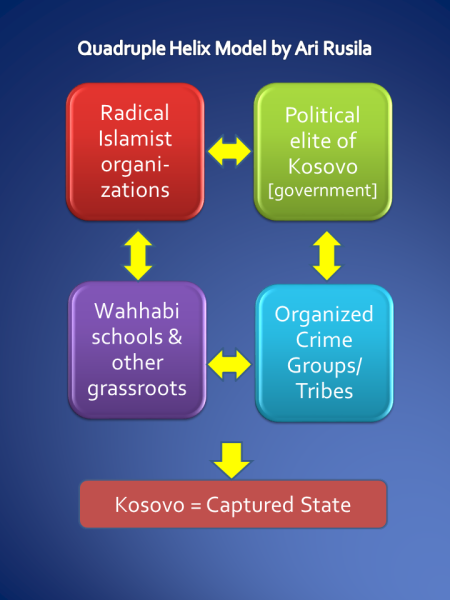 Links between drug trafficking and the supply of arms to the KLA Kosovo Liberation Army (KLA aka UÇK) were established mid-90s during war in Bosnia. In West KLA was described as terrorist organization but when US selected them as their ally it transformed organization officially to “freedom” fighters. After bombing Serbia 1999 KLA leaders again changed their crime clans officially to political parties.  In my earlier article Quadruple Helix – Capturing Kosovo  (in 2008) I described how (Kosovo) Albanian organized crime organizations gained remarkable role in Europe.

Thaçi and other members of his inner circle were “commonly identified, and cited in secret intelligence reports” . For example the German secret state agency, the Bundesnachrichtendienst (BND), describes Thaçi’s Drenica group “as the most dangerous of the KLA’s ‘criminal bosses’. 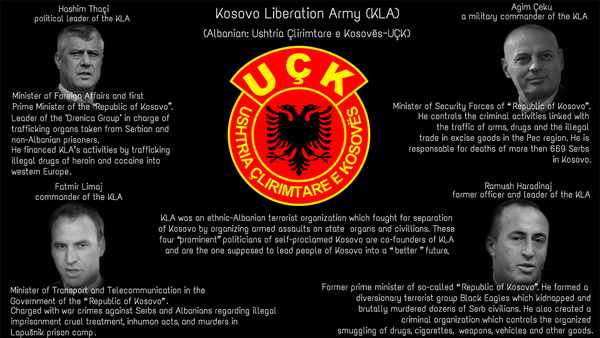 In April 2008 Madam Carla Del Ponte, the former Chief Prosecutor of the International Criminal Tribunal for the former Yugoslavia (ICTY), published a book “La caccia – Io e i criminali di guerra”. In the book, almost ten years after the end of the war in Kosovo, there appeared revelations of trafficking in human organs taken from Serb prisoners, reportedly carried out by leading commanders of the Kosovo Liberation Army (KLA). The report, “Inhuman treatment of people and illicit trafficking in human organs in Kosovo” , for Council of Europe Parliamentary Assembly (PACE), prepared by Swiss prosecutor-turned-politician Dick Marty, expands on allegations made by Mrs. Del Ponte.

The PACE report claims that civilians – Serbian and non-KLA-supporting Kosovan Albanians detained by the KLA in the 1999 hostilities – were shot in northern Albania and their kidneys extracted and sold on the black market. It names Hashim Thaçi, the former leader of the KLA and Kosovo’s prime minister, as the boss of a “mafia-like” group engaged in criminal activity – including heroin trading – since before the 1999 war.

I agree with those who claim that it is clear that Kosovo’s secession from Serbia, as well as its hasty recognition as an independent state, was a mistake. While I was working in Kosovo after bombings as EU expert for local administration it was clear how Kosovo Albanian ”freedom fighters” started to transform themselves to political leaders of this then international protectorate. International community – via UN/UNMIK, NATO/KFOR, EU/TAFKO/EAR and affiliates – which were administrating Kosovo, was well aware of the direct links between organized crime clans and political leaders. 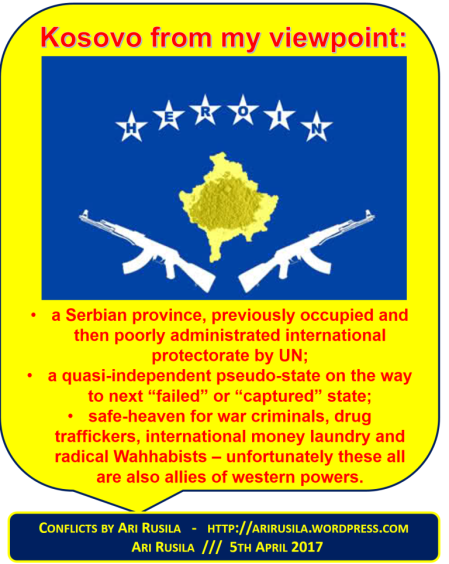 About possible solutions e.g. my articles

The report, “Inhuman treatment of people and illicit trafficking in human organs in Kosovo”, prepared by Swiss prosecutor-turned-politician Dick Marty. Investigations conducted by the Swiss diplomat, Dick Marty on behalf of the Parliamentary Assembly of the Council of Europe (PACE) have revealed the true picture of Kosovo’s prime minister Hashim Thaci. In his report to the PACE’s Commission, Thaci is presented as the leader of a criminal gang engaged in the smuggling of weapons, the distribution of illegal drugs throughout Europe and the selling of human organs for unlawful transplantation. The Swiss senator conducted a two-year inquiry into organised crime in Kosovo after the Council of Europe mandated him to investigate claims of organ harvesting by the Kosovo Liberation Army (KLA) after the war with Serbia ended in 1999.

This entry was posted on Friday, September 17th, 2021 at 9:39 pm and is filed under Conflicts. You can follow any responses to this entry through the RSS 2.0 feed. Both comments and pings are currently closed.