Israel will have five policy options regarding Judea and Samaria when Mahmoud Abbas departs from his post as leader of the Palestinian Authority and none of these options is ideal. This is the conclusion of analysis by Professor Hillel Frisch, professor of political studies and Middle East studies at Bar-Ilan University, and a senior research associate at the Begin-Sadat Center for Strategic Studies.

Prof. Frisch is trying to craft a coherent Israeli policy toward a post-Abbas Palestinian Authority (PA). The task is challenging as the situation is constantly buffeted by tremors and underground currents. These include a wave of terrorist violence against Israelis, albeit declining; a growing rift within Fatah between Abbas and his detractors that is very much linked to the battle over his succession; and the possibility that linkage between those two developments could degenerate into civil war (another arena in the proxy war waged between Iran and Saudi Arabia and their respective allies).

The five approaches are

In every case, however, Israel will have to maintain a military presence in Judea and Samaria.

The article Israel’s Five Policy Options Regarding Judea and Samaria by Prof. Hillel Frisch is BESA Center Perspectives Paper No. 336, March 29, 2016 and it can be found as PDF from here ; a resume of it is represented below:

According Prof. Frisch the Conflict Management Option is probably the most feasible, and the unilateral withdrawal option the least and according him the Unilateral withdrawal would in any case probably prove to be domestically impossible. The chaos option is not entirely in Israel’s hands, contingent as it is on developments within the PA.

Unlike in an excellent article by Prof. Frisch I think that unilateral withdrawal is both feasible and doable; its main benefit might be that Israel can deside it individually. Sure this option is promoted by Isaac Herzog, leader of the Zionist Union, but I understand that the proposal has support in addition to center-left also from center and center-right in Israeli’s political sphere. I would like to emphasize also one aspect namely separate truce with Gaza/Hamas and in best case implementation sc Sinai option which could solve refugee question with positive outcome to some of problems in West Bank too. 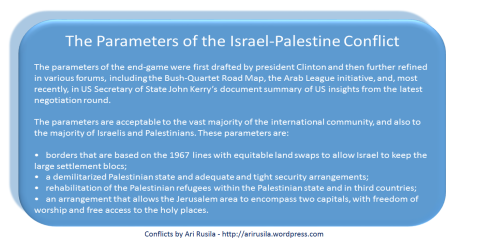 The components of Two-State solution have been roughly clear last two decades – see ‘Parameters of the Israel-Palestine Conflict’ above – but the final agreement is still missing. The international pressure might lead to talks or negotiations again, with or without outside facilitators, but probably with the same outcome than earlier. So from my perspective unilateral actions are steps forward and in my opinion also to the right direction.

If peace negotiations don’t start, they fail again or regional solutions can’t be realized this time so from my viewpoint Israel could independently implement what I have called a ‘Cold Peace Solution’, a minimal level of peace relations, where Israel would annex main settlements from West-bank inside the security fence and return to negotiations about other than so solved border issue when both parties feel need to make a long term deal. This solution in my opinion is the best way forward and it even might be possible to implement. If unilateral solutions are made in the framework of constructive unilateralism so this approach might be the right roadmap towards more permanent two-state solution.

This entry was posted on Wednesday, March 30th, 2016 at 9:46 pm and is filed under Conflicts, Israel. You can follow any responses to this entry through the RSS 2.0 feed. Both comments and pings are currently closed.